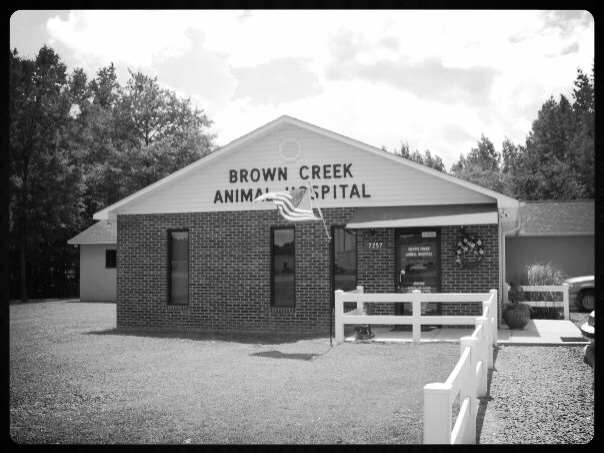 Our old building where it all began.

It has always been the dream of Dr. Danny Wright to own his own veterinary hospital and on November 19, 1999, that dream was realized as Brown Creek Animal Hospital opened its doors for business in Dr. Wright’s hometown of Polkton, North Carolina.

The first hospital was a quaint 1800 square-foot concrete block building. Dr. Wright served as the general contractor for the construction of the hospital while also adding a great deal of “sweat equity” into his dream. The hospital had a small waiting area, two exam rooms, small surgery and radiography rooms, twenty animal cages and four dog runs. The staff consisted of Dr. Wright, his wife Meri Beth as his assistant, and his sister as the receptionist.

As business increased, it soon became apparent for the need for more room. A 1000 square-foot east wing was added to the building in 2001 to accommodate additional canine runs and storage. In 2003, a 650 square-foot west wing was added. This included a separate feline ward, office and storage space and an employee break room. The last addition to the campus was the construction of a 2100 square-foot free standing canine boarding facility just to the rear of the main hospital building.

Our hospital has continued to be blessed and grow. With the addition of Dr. Skip Severt in the summer of 2007, soon followed by Dr. Rutledge, Dr. Marsha Severt, and recently Dr. Daniel Fordham, we have increased our capabilities and services to our patients. As time passed, the need for expansion became apparent. A 20,000 square-foot manufacturing facility located adjacent to our hospital became vacant. After several months of negotiating, planning, and prayer, Drs. Wright and Severt purchased the property. The northern half of the building was completely remodeled into a state of the art companion animal hospital.

We opened the doors of the new facility on July 19, 2010. We now wonder how we ever managed to practice in the “old building!” Our new hospital has over 10,000 square feet of space. We have over 50 individual canine runs, a feline ward with cages and “kitty condos,” a canine ward for our hospitalized canine patients, and an isolation ward for the infectious patients. The new hospital has three spacious exam rooms, consultation room, state of the art diagnostic laboratory, pharmacy, large surgery suite, and expansive treatment area.

Brown Creek Animal Hospital continues to be blessed beyond our most unimaginable dreams from way back in 1999. This success is a testimony to our remarkable staff, veterinarians, community support, and above all, our devoted clients. It is these clients and their pets that make our job so much fun and a joy to share over nearly two decades!