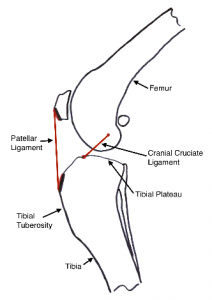 What is Cruciate Rupture?

Cranial Cruciate Ligament (CrCL) rupture is one of the most common causes of rear limb lameness in the dog. The CrCL is one of 2 ligaments that cross inside the knee (stifle) joint). This ligament is similar to the anterior cruciate ligament (ACL) in humans. The cruciate ligaments prevent the femur and tibia from sliding back and forth on each other. The top of the tibia is the tibial plateau. During weight bearing, the tendency of the femur is to slide down the tibial plateau. The CrCL stops this downward slide, and therefore, is under constant tension during weight bearing. This biomechanical stress on the ligament leads to fraying and eventually tearing or rupture. Click here to learn more about how this ligament can become damaged.

Deterioration of the CrCl releases a combination of inflammatory factors from the ligament. This combined with the increasing instability of the joint from the weakened ligament causes arthritis to develop quickly within the joint. Every time the pet bears weight on the affected leg, the femur slides down the tibial plateau with nothing to halt its movement. This sliding action damages a cartilage cushion in the joint called the meniscus. Once the meniscus is torn arthritic change accelerates and perceived pain worsens. Weight bearing studies have shown that dogs with a damaged CrCL bear only about 20-30% of the normal amount of weight on the affected leg. As a result, the weight is shifted to the other rear leg placing even more stress on that limbʼs CrCL. 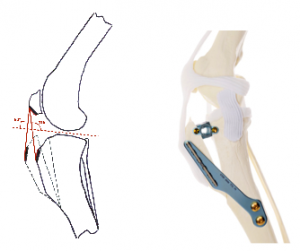 Tibial Tuberosity Advancement or TTA is a procedure developed to restore joint stability in cranial cruciate deficient canines. Research has shown that if the angle between the patellar tendon and the tibial plateau could be reduced to a perpendicular (90 degree) angle, then the joint force would be shifted so that the joint is stable even without the CrCL. The TTA involves an osteotomy of the tibia, just behind the tibial tuberosity, hence the name. The tibial tuberosity is advanced to align the patellar tendon to 90 degrees to the tibial plateau. This new alignment eliminates the need for a CrCL and results in a stable joint. The advanced tibial tuberosity is secured using titanium implants specifically designed and manufactured by KYON to meet the unique demands of the procedure, providing a sound biological fixation. A bone graft is often packed in the open area of the osteotomy to speed up healing, which takes approximately 8 weeks. KYON launched TTA for cranial cruciate deficiency in dogs in early 2004, following three years of clinical testing and implant development/refinement. KYONʼs TTA procedure has been used in over 100,000 cases by more than 900 surgeons and has become an important addition to the canine cranial cruciate repair armamentarium. 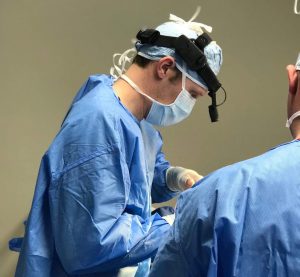 If you want to learn more about TTA and KYON TTA implants visit www.kyon.ch.

Regardless of which surgery is performed, it will be necessary for you to restrict your pet’s activity for approximately 8-12 weeks. We understand this is difficult, but it is paramount to a successful outcome.

Before surgery, Dr. Severt will provide details on the surgical procedure itself, expectations of success, and answer any questions you may have regarding your pet.

Dr. Severt also will meet with you when your pet goes home and will provide written instructions for the rehab process. 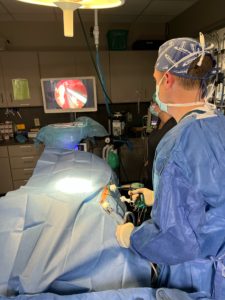 With veterinary laparoscopic surgery, the surgeon makes 1-3 small incisions, the size of a keyhole, through the body wall.  Specialized surgical instruments are inserted through these small holes where a laparoscopic camera is used to provide real-time video, allowing the surgeon to view individual organs as well as guide the proper instrumentation to perform the necessary procedure for your pet. 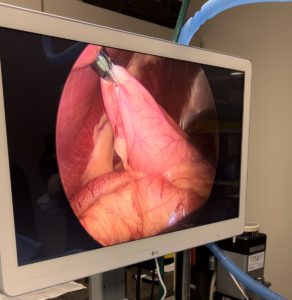 While some limitations do exist for laparoscopic surgery, its incorporation into our practice provides an added capability to perform many routine and diagnostic procedures with greater safety, less pain, and a faster recovery for your pet.

For more information on Laparoscopic Surgery, please contact a member of our veterinary team.